Back to Archive
← Nothing Breaks Like a Heart This is me! →

Calming down my kids

I just wanted to talk about some stuff that happened yesterday and how we handle it here. Everybody was having a rough day yesterday. It was gloomy here in Colorado, and when the sun doesn’t show up in Colorado, everybody gets crabby. So the energy level was a bit low yesterday.

My daughter, Josie, was having a crappy day. She had been tired, probably malnourished. Not malnourished but had more junk food than usual. So she was having a bit of a meltdown.  I want to talk about how I handle those situations with the different techniques I teach in my courses.

My other daughter, Izzy, my husband, Ben, and I were playing a game, and Josie was just too exhausted to even play, but too stubborn to take a nap.  I scooped her up, and I just held her. I didn’t ask her any questions at this point. I don’t know if you have read or listened to The Whole Brain Child, super cool book, but it talks about how you literally “pop your top”.  When you go out of your normal frequencies, your brain literally can’t comprehend any rational thoughts or conversations to figure out what’s wrong.

So I just held her, just made shhhh noises, like white noise. I massaged her legs and feet while holding her. So this reminds people that they have a body and they don’t have to be stuck in a memory or stuck in an event. It brings them back to here and now.

While I’m held her, I massaged her and was just there for her. There was no asking questions. She needed to come back to this present moment before she could even be coherent to begin with. So once I did that and got her calmed down, we talked a little bit about what was going on and how she was feeling. She loves to draw, and that makes much more sense in her brain than anything else.  So I asked her to draw me a picture of what she was feeling.

This is how she was feeling. But what does all that mean?  She told me about everything and what it all was and the sensations she was feeling. I still needed a key. So she made me a key. Stress is green, sad is blue, red is anger, and the magenta represented the two types of soreness she was experiencing.  I think she was also going through some growing pains. 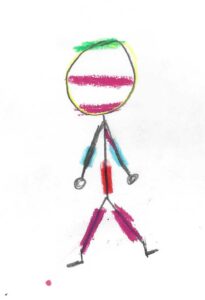 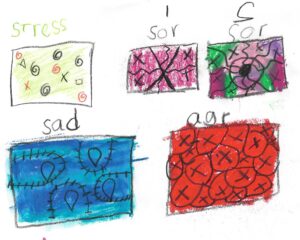 What I found super interesting is the stress. I feel like that’s a pretty accurate depiction of stress. She told me that the stress was at the top of her head. Now, I tell you what, that’s perfect because stress is a brain thing.

So for her to accurately depict where stress would live at the top of the head where you’re just not living in your body was so impressive. Even though I truly think kids know this stuff more than we do. It comes much more natural to them. So I just thought it was an amazing example of how to really feel into our emotions and feel where they sit in our body.

She had lost connection to the rest of her body while she was freaking out, popped her top. In our minds, our bodies don’t exist at this point.

Also on there was anger in her belly.  She said there was enough space.  She was angry and the anger sat in her belly and it was too tight, too compact.  If you look back at the key, anger is very clustered, and looks horribly uncomfortable!

But man, that stress one. I was like, oh, my gosh, if somebody could draw my brain when I’m freaking out. That is so spot on. If drawing helps relieve some emotions and this is another way that you can handle some stuff, draw out where your different emotions are sitting and draw what they look like. Close your eyes and draw what they look like sitting in your body and that’s one way that you can help process them out or at least learn where they live and what they feel like and how to recognize them so I hope that was useful.

Let me know if you have any questions.